A deadly pandemic has hit America! As president, it's up to you to lead the country to a vaccine, but one wrong move could spell disaster for your presidency! Your decisions affect everything, from the stock market to your base approval rating. Keep everything from crashing until a vaccine is found and you win!

This game is based on real events, actions, and choices ripped straight from the headlines. But for legal purposes, it's all parody. MPGA!

Make Pandemics Great Again was made by Dillon Becker.

Why are you commenting here and not on that game? lol. The controls are shown on screen in the first level. I believe it's X key on keyboard, B button on gamepad.

This game is funny and super difficult, but that's the point right! Got nowhere near the vaccine completion but I still had lots of fun haha! :D Good job! :)

how do u win??? ive been trying for an hour and a half.

Another ORANGE MAN BAD game? Soy's flowing everywhere, even on itchio. THE SALT MUST FLOW!!!!

make it less politically motivated and you'd get more comments. people around the globe are really suffering from this and it's not 100% trump. granted, he's a moron, but it would be a moron thing to point the finger at a false enemy. pick your political positions on things that actually matter, not if someone can't juggle 100 eggs, which is a similar situation to what we're dealing with. i like the pace of the game, music and impending doom of the bank account. maybe update description with tips? i feel like i'm pretty savvy but for very green games that are not mass publicized by pewdiepie it might be good to give hints for traction and then update to not include them if the game blows up in popularity.

Read some news. He dismantled the national pandamic response agency. He called it a liberal hoax for over a month, tried to profit off from tests. Blocked tests/ventilators from getting to people who needed them and constantly lies about health advice. The US passing italy/china in confirmed cases are 100% trump's fault.

So by saying "The US passing italy/china in confirmed cases are 100% trump's fault.", because Trump controls math? The US population is 5.45x the size of italy. The growth rate of the disease has a consistent curve around the globe. By "read some news", I'm guessing you have a particular news source you'd like to recommend. and if i fact check that news source lets see how accurate it is

The elecions of 2016 are, in the words of admiral akbar

I disagree I think we need more political games. Games are such a good outlet for this type of thing.

well, that comment didn't age well much huh. if trump isn't the enemy (in the pandemic situation) then who is? all those people don't care about their health? maybe

honestly tho, i feel like the exact point of this game is to be a political statement. that's the entire purpose dude 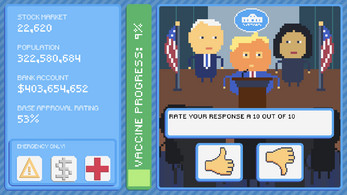 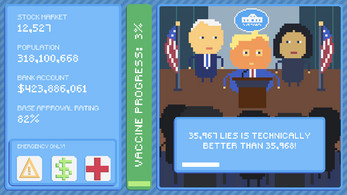 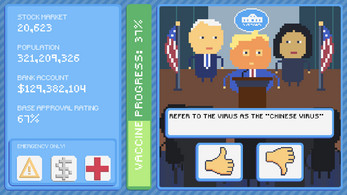